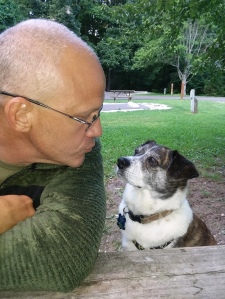 The other day Cristi and I were talking about how long we’d been in Savannah and what our next plans might be. I told her I was worried about running out of things to write about if we stayed too long.

Careful what you wish for.

At the time we were living in the guest house on our friend Diane’s property. I was working a couple days a week at Savannah Canoe and Kayak. Putting out feelers to see if I could find a position in the outdoor industry that would move us back up north and closer to the Boundary Waters and Lake Superior. Our day-to-day life was safe and secure. I was managing to put out a post every week and Cristi had started picking up a little more gardening work out on Tybee Island. My biggest concern was working my way through all the camping gear we had in our closet as I tried to crank out reviews for the blog.

Well, that obviously wasn’t the biggest worry, what with COVID and all, but it was on my mind. I was enjoying writing for the blog and looking forward to having something fresh to write about. Maybe we would travel again once the whole pandemic thing settled down. It would be good to get back on the road.

Then things got interesting.

I was on the phone interviewing for a sales rep position at Wenonah/Current Designs, having a great call with Wenonah VP Bill Kueper. Unbeknownst to me, Cristi was in the yard talking to Diane about the house. Diane told her that she was having a family emergency and needed a place for her niece to stay. Could we move out of the guest house on short notice? How soon might it be possible? Next week?

Bill and I wrapped things up. I was excited. They wanted me in Winona. Wanted me to take care of the Boundary Waters rental accounts plus handle wholesale accounts in the Southeast. It was a perfect gig for me. One that would keep me connected to friends in the south and adventures Up North. I couldn’t ask for better news.

Cristi’s news was stressful. We needed to move in a hurry and didn’t have anyplace to go.

We had a couple weeks to move out of the guest house. After that we could move into the Casita and hit the road for the Midwest. It would be a challenge, but we would make it work.

Thankfully we didn’t have to. Our friends saved us again. Cindy talked to her mom. Janet’s house was empty while she was visiting family in Wisconsin. We could stay there for a few weeks. Thank you! Queenies to the rescue!

We got to work cleaning and packing.

A couple weeks at the Wilmington Island safe house helped us organize our lives and complete a few projects on the Casita. Cristi landed a job at Prairie Moon Nursery near Winona so we would both have work when we arrived in town. Things were falling into place.

Our plan was to get back on the road the first week of August, head to our storage unit in Green Bay for a gear shuffle, and then move on to Winona to scout a place to live.

Then came the hurricane.

Tropical Cyclone 9 popped onto our radar on the last Tuesday in July. By Thursday it was Tropical Storm Isaias, projected to become a hurricane by Saturday. Reached hurricane strength by Friday morning and started tracking north toward Florida. Sunday it was supposed to whip by Georgia on its way to North Carolina hitting us with rain and high winds. Holy shit. Hurricane? Now? Seriously?

To top it all off, Pedro the Wonder Dog was acting strange. Lethargic. Mopey.  We were giving him some scratching and words of encouragement when we discovered that the lymph nodes in his neck were noticeably swollen. This was new. Maybe serious. A bad infection? We took him in for a last minute checkup.

We’ve been riding the highs and the lows for a couple weeks now. Lost our place. Found a new one. Got a great job offer. Hurricane. Cristi got a job at an amazing plant nursery. Pedro has a couple months to live.

It’s been a lot to take.

For a minute there I thought we were going to have a clean run. We hit some choppy water the last couple weeks, but we kept our feet.

Now I feel like the wave is closing out. Pedro has been a rock for us. Like an emotional jet pack. Someone who helped us through tough times with his sunny disposition. His loss will be hard to take.

But that’s the nature of things, isn’t it? Dogs make us more human, but dogs share our lives for such a short time. We know what will happen in the end. We know it’s going to hurt.

See you all in Minnesota. 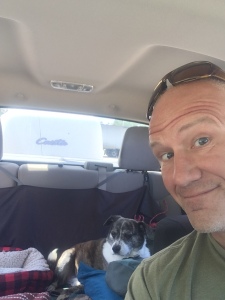