There are a handful of pieces of outdoor gear that legitimately qualify as classics.

I  bought my Patagonia Houdini jacket sometime back in the mid-2000s. Memory fails, but I know I was working at Rutabaga at the time. My friend Mark and I were house sitting for the former dean of the UW School of Engineering in a big house up on Highland. It was winter. I was trying to increase my running mileage, and I needed a breathable windbreaker. The Houdini was feather light and came in a light color that would be visible at night. Order up!

Since then the Houdini jacket has been the single piece of outdoor gear that I’ve used the most. It travels with me almost all the time ready to block a cold urban wind or backcountry bugs. I introduced Cristi to the Houdini on a windy afternoon in downtown Asheville as we walked from our car to the Early Girl Eatery. She was an immediate fan and eventually ordered a Houdini of her own.

My Houdini was wind resistant, breathable, bugproof, water repellent and compact. It logged countless backcountry days and city nights. Then it died.

The Houdini is dead. Long live the Houdini.
A strange thing happened this summer. My Houdini, which had been remarkably bombproof up until then, started to rip. First the arm ripped. OK, I thought, I must have rubbed up against something sharp. I fixed it with Tenacious Tape.

Next it ripped on the shoulder. Clumsy me! More tape. The Houdini was starting to look pretty authentic.

Cooking breakfast over the two-burner I got the arm a little too close to the flame and “whoosh,” I melted a fist-sized hole through the fabric near the cuff. Holy Crap! I didn’t think I was THAT close to the burner! Oh, well. Out came the tape. A patch inside and outside fixed the problem. My Houdini was starting to get a sort of patina of legitimacy that only comes with extended use. Houdini gets beat down, steps back up.

We finished our western road trip and ended up in Savannah, GA for the winter. On a hot fall day I wore the Houdini for sun protection on a kayak tour to Little Tybee Island. When I got back to Alley 3 and pulled off my sprayskirt I saw a rip in the front of the jacket about 8 inches long right next to the zipper. There was no way I was going to get tape to stick to that.

What’s more, the fabric of the jacket seemed really weak. I could pinch it and tear it by hand. No wonder I had been getting all those rips over the summer. Something had happened to the fabric. UV? Old age? I didn’t know.

What I did know is that Cristi has a Patagonia windbreaker from the early 1990’s that is still going strong. It seemed strange to me that the fabric on the Houdini would shred like that, when a much older jacket was still holding together. Maybe it was just wear and tear but maybe there was something wrong with that batch of fabric. One way to find out. Send it back to Patagonia to be evaluated.

Now, I’m not saying that this jacket owed me anything. On the contrary, I was very happy with the service that I got out of my Houdini for all those years. On the other hand, I was just off several months of travel, sitting a few grand in the hole and working a retail job to cover the bills. The Houdini was essential gear, something I used almost every day, and I didn’t have a hundred bucks to run out and buy another one.

About six weeks later I got an email from Patagonia. They had issued me a credit. I had a digital gift card that could be used online on the Patagonia site or in any Patagonia retails store. The credit was big enough to replace the Houdini and cover shipping and tax.

I don’t know what I had expected. In similar situations with other manufacturers I’ve had mixed results. Patagonia came through with top-notch warranty service. Thanks!

New Houdini
After a little deliberation on color I ordered a replacement jacket. When it arrived I realized that I had the wrong size. The new Houdini fit over a t-shirt, but when I tried layering it over an R1 top the arms were too tight. I don’t have Popeye forearms by any stretch, but there was no way a large was going to work. A quick call to Patagonia set up an exchange and got an XL on the way.

I’ve been wearing the new Houdini for a couple weeks now. Here’s my take on the latest version of this classic windbreaker.

Cut
The newest version of the Houdini is cut slimmer than the original. I wear a size large in virtually everything from Patagonia from baselayers to shells. This jacket runs small. Fit through the body is OK but the sleeves are cut too tight to allow for even the lightest insulating layer underneath. Since I want to be able to wear the Houdini over the top of a fleece layer I had to go up to an XL. The XL fits well in the arms  but is big in the body and the sleeves and hem are longer than necessary. Not the end of the world, but Patagonia could do a little work to dial in their sizing.

Looks like I’m not alone in thinking the fit of the Houdini is a bit off. The Patagonia website currently shows about 40 percent of reviewers saying that the fit is true to size. That means 60 percent of folks think otherwise.

Women’s sizing is also slightly small. Cristi had to go up a size to get a Houdini that would layer over light fleece.

Color
My biggest gripe with the new Houdini has to do with color. Patagonia offers a ton of colors in this jacket but most of them are dark. The ones that aren’t dark are bright. The way I see it, a wind shell should be a light color so you can wear it for sun or bug protection without roasting. I also prefer colors that blend into the natural landscape rather than pop out. My old Houdini was light grey. The lightest neutral color I could find in the current Houdini was Hammond’s Gold, a caramel color. It works, but I would have preferred something a little lighter.

Fabric
The current Houdini is sewn from an ultralight mini-ripstop 100-percent recycled nylon fabric. The fabric has a slight pucker to it that holds it away from the skin if you’re wearing it over a t-shirt. On a cold, blustery morning a few days ago the Houdini did a good job of blocking the wind. The fabric is slightly air permeable but plenty wind-resistant. Just what you want in a wind shell.

Patagonia rolled out a new version of their website a week ago and it no longer lists the fabric weight and overall weight of their garments. Maybe this will change in the weeks to come. For now I have to guess that the fabric is a touch heavier than my old Houdini. The jacket packs down a little bigger and probably weights a half-ounce more. Given the improvements Patagonia has made in features I’m happy with this tradeoff.

The feature set of the new Houdini is a big improvement over the original version. Most noticeable is the hood. The old hood had a couple drawcords that tucked into button holes inside the placket of the jacket. These always came loose and whipped around in the wind. The new hood synches with a single pull at the back. It secures the hood firmly to your noggin and the snugged-down hood doesn’t impair peripheral vision. It’s a much better fit than the original version.

The Houdini uses tiny plastic synches on bungee cords rather than spring cordlocks. These are simple, effective and lightweight. A good solution.

Of course, the Houdini zips into its own pocket. I guess this is a nice feature if you need to hang the jacket off your climbing harness. I just cram the thing into a pack, so I don’t have a strong opinion on the storage pocket thing.

What I do like is that the pocket can now be accessed without opening the front zip of the jacket. The old pocket was inside the front zip and was held closed by a tiny Velcro dot. I rarely used it because it was tiny, a hassle to access, and didn’t seem secure. The new pocket is a big improvement. Still small, but big enough to hold eyeglasses or car keys.

Why is the Houdini Essential Outdoor Gear?

In my series of posts on outdoor clothing I outlined seven layers that can be combined into a Simple Clothing System that will keep you comfortable in any outdoor conditions. One of the most important components of this system is a good windbreaker.

Wind shells are among the most useful pieces of outdoor clothing you can carry. Wind shells provide lightweight warmth when layered over other garments. They block enough wind to prevent heat loss on cold days. They can be worn for sun and bug protection. Worn inside a winter layering system a wind shell dramatically increases warmth. All the advantages of wind shells are discussed in detail here. The bottom line is you need a good one and once you have one you’ll find yourself using it all the time.

Good wind shells are simple and lightweight. They don’t have a bunch of extra features to weigh them down. They’re cut big enough to wear over lightweight fleece insulation and baselayer but not so big that they flap around like a sail. Good wind shells are versatile and so compact that you’ll never leave them at home.

The Houdini is all these things. It doesn’t have a bunch of extra features like handwarmer pockets that would bulk it up. It’s ultra compact–small enough to cram in the back pocket of your jeans. The fabric is wind resistant and slightly air permeable. The cut is generous enough to fit over light insulation (if you size it right).

In short, the Houdini is the perfect wind shell. 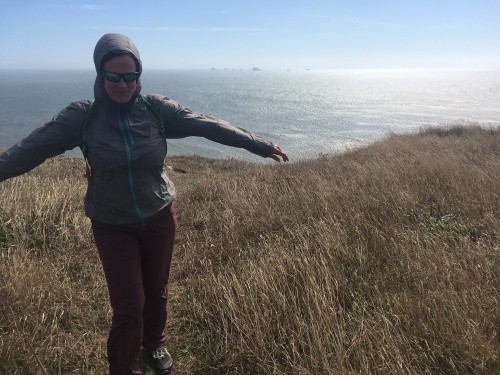 If you enjoyed this post, please consider subscribing to our blog by using one of the links in the menu on the right side of the screen. On your mobile device you’ll find the links if you scroll to the bottom of the page. Thanks!