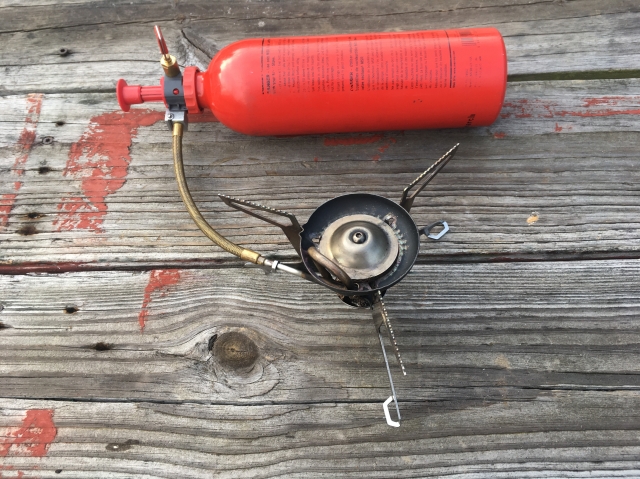 The MSR Whisperlite has been around since 1984. I can’t believe I waited so long to buy one.

If you’ve been reading the blog for a while you know I used to work for a rep agency that handled MSR products. Part of my job was to travel around the Midwest to teach retail store employees about MSR gear.

The stove clinic was my favorite. I broke out the stoves, fired them up, took them apart, and put them back together again. We set stuff on fire. Always a big hit.

I’m an outdoor gear nerd from way back. With stoves I’m at my nerdiest. I’ve owned and used a lot of them.

My first stove was an MSR XGK, a lightweight blowtorch that was a descendant of the original MSR XG mountaineering stove. Since then I’ve owned MSR’s Firefly, Dragonfly, Pocket Rocket, and Isopro. Add to this a handful of Trangia alcohol stoves, a couple Snow Peak Gigapowers a Jetboil Minimo and a few home-made alcohol stoves. The list is pretty comprehensive. It’ll admit, it’s way more stoves than anybody needs. It’s excessive. Maybe a sickness…

I’m not sure if there is a cure for Stove Acquisition Disorder. In fact, like other addictions, it seems to worsen over time. At best it goes into remission. And then, only for a while.

The Whisperlite
I had a SAD flare-up a couple years ago while planning a Boundary Waters trip. I was sitting there, trying to figure out which liquid fuel stove to take as a backup to campfire cooking, and it hit me. I needed a Whisperlite.

Well, I have a Dragonfly stove, but I was a little tired of how loud the damned thing is.

Don’t get me wrong. I love the Dragonfly. It has a very cool design that runs the fuel valve right down into the generator box under the burner. This means that the stove throttle controls the flow of fuel to the burner after it’s been converted from a liquid to a vapor. The result is amazingly precise flame control. You can simmer the burner down to a tiny candle flame. It’s wonderful to cook on.

But the Dragonfly is LOUD.

The Dragonfly uses a bell-shaped burner similar to the XGK. Gas vapor comes shooting out of the stove jet and slams into the burner plate as it ignites. This kind of burner sounds like a jet engine. Not exactly the best choice for brewing an early morning cup of coffee while your wife sleeps-in. I needed something quieter.

The Whisperlite is quiet.
It has a ported burner design that blasts out heat without busting your ear drums. You can run a Whisperlite without waking up your tent mates. A Dragonfly will wake up the campsite across the lake.

The Whisperlite is reliable.
The Whisperlite is tough as nails. It runs. If it stops running you can fix it. In the field. With a minimum of tools. You can take the Whisperlite completely apart, clean it, replace any broken or worn parts, and have the stove back in action in a few minutes.

The Whisperlite is light.
Not as light as the lightest pressurized canister stoves, of course, but very light for a liquid fuel stove. The Whisperlite International comes in at just under 15 ounces. Add a fuel bottle and the weight climbs by 4 or 5 ounces. That’s only 5 ounces heavier than my JetBoil MiniMo system. Yeah, the JetBoil comes with a pot. But a pot doesn’t weigh very much.

The International does everything the Whisperlite does. Better. It has a bigger generator tube that’s brass clad. This delivers more fuel to the burner and does a better job of vaporizing fuel in cold temperatures. Despite the bigger generator it’s actually slightly lighter than the Whisperlite. The stamped stainless steel legs on the International shave off enough weight to more than make up the difference.

On top of this, the International will burn just about anything.

The Whisperlite is a white gas stove. The International will burn white gas, unleaded and naptha. It’s larger fuel tube resists fouling longer than the conventional Whisperlite so it is more tolerant of poor quality fuels. Change the jet and it will burn kerosene. Got some fuel/oil chainsaw mix laying around? Not a problem. The kerosene jet will eat that up. The only thing that it won’t run is alcohol. Which isn’t a problem.

Alcohol is a better libation than a stove fuel anyway.

Versatility
A final point in favor of the Whisperlite that it’s a liquid fuel stove. If you’re going to have only one stove, it makes sense for it to be run liquid fuel. Liquid fuel stoves perform better in cold conditions than canister stoves. They work in the winter. A canister stove might be more convenient for warm weather trips, but it won’t get the job done when the temperatures plunge.

Liquid fuel stoves can also a better choice for longer trips. On a trip longer than a week, there’s a good chance you’ll get more fuel and burn time for less weight with a liquid fuel stove than you will with a canister stove.

Simmering
The one thing that a Whisperlite stove doesn’t do well is simmer. This is a fact. As you close down the fuel valve on the pump the flame goes lower and lower and then…goes out. You just can’t turn the Whisperlite down low enough to simmer.

There is a trick.

I didn’t invent this trick. I read about it in the NOLS Cookery. It works. Here’s what you do:

Sounds a little sketchy, doesn’t it? In fact, it sounds sketchy enough that my Outward Bound instructor manual specifically said DO NOT do this. But NOLS says it’s OK. Who to believe?

If you hold the bottle in your right hand with the stove on the left you’ll line things up so the vent ports in the pump body point away from you. This means that any vented fuel vapor will be directed away from your body. The fuel vapor doesn’t get anywhere near the stove itself. And you’ve turned off the stove so there is no open flame to ignite the fuel vapor. Right?

You did blow out the flame, didn’t you?

Be sure to blow out the flame. Seriously. And for Pete’s sake don’t touch the hot stove!

You have to re-light the stove right away so that the generator tube doesn’t cool down. Blow it out. Vent it. Light it. Quick like.

Once you depressurize the fuel bottle the stove will simmer like a champ. The generator tube stays hot enough to vaporize fuel and this draws enough fuel out of the bottle to keep things running. Using this technique you can get the stove down to a very low simmer. Cool enough even to cook rice. It really works.

It’s a good idea to depressurize the fuel bottle before you put it in your pack. This reduces the chance that it will leak if the fuel valve accidentally opens.

Here are a couple quick and dirty how-to videos. The first takes you through priming and lighting. The second demonstrates the simmer trick.

The Whisperlite Universal
What about the Whisperlite Universal? This stove has all the features of the International but comes with an extra base and fuel valve that fits an isobutane canister. The stove base holds the canister inverted, which improves cold weather performance. This makes the Universal seem like the stove to get if you want maximum versatility. Especially if you’re only going to have one stove.

That said, I’ve never used one. I don’t know how well it simmers on isobutane or how well it works in cold weather. So I can’t really recommend that somebody buy it.

When I bought my International I already had a bucket full of stoves, so the Universal didn’t appeal to me. I wanted the perfect lightweight liquid fuel stove and didn’t want to spend the extra 40 bucks.

If I were buying a first stove I might be tempted, but probably not. For not much more than that you can buy a Pocket Rocket or a Snow Peak GigaPower. Either one is lighter and more compact than the Universal, and for the same money you’d have a two stoves instead of one.

Essential Outdoor Gear
The Whisperlite has been around since 1984. It’s a proven performer that’s logged tens upon tens of thousands of backcountry travel days in the hands of countless people. It’s light, hot, reliable and quiet. If you don’t have a backpacking stove, it should be the first stove you buy. If you’re thinking about expanding your season into fall and winter, pick one up. There is a short list of outdoor equipment that qualifies as Essential Outdoor Gear. The Whisperlite International is on it.

MSR has a bunch of videos on their site that detail how to maintain and repair their stoves. Here are two for the Whisperlite. The first covers pumps. The second stoves.

If you enjoyed this post, please consider subscribing to Kitchi-Gami.com by using one of the links in the menu on the right side of the screen. On your mobile device you’ll find the links if you scroll to the bottom of the page. Thanks!

Kitchi-Gami is now set up as an Amazon Associate account. This means that if you click through one of the links in our post and decide to purchase something from Amazon we get a small commission. There’s no extra cost to you. It’s a painless way for you to give us just a little help with the site. If you see a book you like and want to purchase it from Amazon, please consider using one of the links on our posts and pages. Thanks!